King Ashwapati and the Language of Birds

King Ashwapati had the power to understand the language of birds, but if he ever revealed this knowledge, he would die.
One day when the king was sitting by the royal pond with his wife, he heard some swans talking. One swan told a joke, and King Ashwapati burst out laughing.
"What's so funny?" asked the queen.
"I cannot tell you," said the king. "It would cost me my life!"
But the queen persisted, and the king finally sent her back to her parents and found a wetnurse for their daughter.
That daughter was Kaikeyi, and the wetnurse was Manthara.

Inspired by: Sita: An Illustrated Retelling of the Ramayana by Devdutt Pattanaik
Notes: This story is on p. 70 of the book. Pattanaik notes that this story about Kaikeyi's father comes from the folk traditions of Odisha and Andhra Pradesh.

The god Indra asked King Dasharatha to help him fight the demon armies of Timidhvaja.
Queen Kaikeyi rode with Dasharatha into battle as his charioteer, and when the wheel-axle broke, Kaikeyi bent over the edge of the chariot and stuck her hand through the wheel, using her arm to to replace the axle.
Later, when Dasharatha was wounded by the demons' weapons, she carried him away from the battlefield to safety.
"I owe you my life!" said Dasharatha gratefully. "I grant you two boons to use for whatever you want whenever you want."
Later, Dasharatha would bitterly regret his promise.
Inspired by: Sita: An Illustrated Retelling of the Ramayana by Devdutt Pattanaik
Notes: This story is on p. 68 of the book. The story also appears (without all the detail) in Valmiki's Ramayana, Ayodhya Kanda (Book 2), sarga 9.

When Sita came to Ayodhya, Rama's mother, Queen Kaushalya, was eager to tell her all about Rama.
One day Sita asked, "Rama belongs to the Solar Dynasty of kings that descend from the Surya, the sun-god, but you call him Ramachandra, Moon-Rama. Why is that?"
"Rama wanted the moon to sleep beside him," Kaushalya explained. "But no matter how loudly he called to the moon, it stayed up in the sky. So we put a pot of water on his bed, with the moon reflected in the water. Little Rama slept with the moon, and so we called him Ramachandra."
Inspired by: Sita: An Illustrated Retelling of the Ramayana by Devdutt Pattanaik
Notes: This story is on p. 69 of the book. Pattanaik notes that some legends explain the name differently, saying that Rama's treatment of Shurpanakha and also of Sita put a blemish on his solar reputation, making him Ramachandra.

When the four brides arrived at Ayodhya, Arundhati, Vashishtha's wife, warned them to always wear their marriage symbols: beads, bangles, toe-rings, and vermilion in the parting of their hair.
"We were once seven couples in the forest," she said. "Seven rishis and their wives. But one day the other wives worshiped the fire without putting on their symbols. The fire-god Agni, thinking they were unmarried, ravished them, and their husbands then rejected them. They became the Matrikas. Meanwhile, I am honored as the star that sits beside the constellation of the Seven Rishis."
The brides took her warning to heart.
Inspired by: Sita: An Illustrated Retelling of the Ramayana by Devdutt Pattanaik
Notes: This story is on p. 66 of the book. The Sapta-Rishi constellation is called the Great Bear in English, and the star Arundhati is called Alkor. Meanwhile, the Krittika constellation is the Pleiades, or Seven Sisters. You can read more about Arundhati, the Seven Sages, and the Matrikas at Wikipedia; the number of Matrikas varies from story to story. There is also an article about the Krittikas (constellation).
Posted by Laura Gibbs at 9/20/2020 04:40:00 PM No comments:

The Marriage of Sons and Daughters

After Rama passed the marriage test, King Janaka proposed not one, but four marriages. "Let your three brothers marry Sita's three sisters!" he proclaimed, and so Sita married Rama, Urmila married Lakshmana, while Mandavi married Bharata and Shrutakirti married Shatrughna.
After the wedding ceremony, Sunaina, the mother of the brides, gave them each two dolls made of sandalwood, king and queen, to keep on a sacred altar in the courtyard of their new home.
Sita brought with her the seeds of all the plants in her mother's garden so that she could cook the foods of Mithila even in Ayodhya.
Inspired by: Sita: An Illustrated Retelling of the Ramayana by Devdutt Pattanaik
Notes: This story is on p. 59 of the book. This is the Bala Kanda (Book 1), sarga 73 of Valmiki's Ramayana. Note that instead of giving all the sisters to Rama, the story celebrates monogamy: one wife for each husband. Pattanaik notes that the custom of the king-queen dolls comes from Tamil Nadu, Andhra Pradesh and Karnataka. You can read more about Marapachi Dolls at Wikipedia. 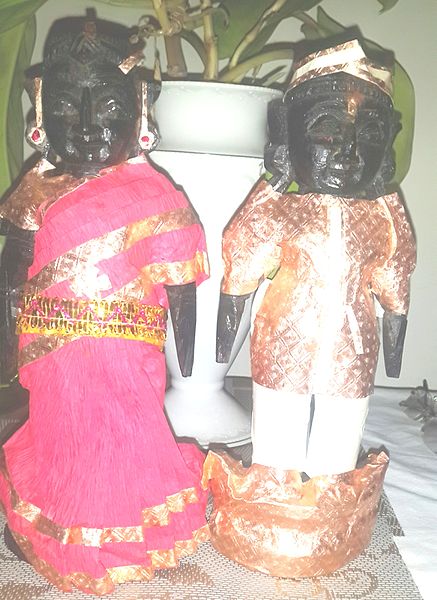 With the help of Narada, the robber named Ratnakar began to meditate. As he meditated, ants came and built a great anthill (valmikam) all around him.
Years later, Narada returned. He broke open the anthill and said, "It's time to come out now. Do you remember who you are?"
"I was a robber," the man said. "Now I am..."
"Now you are a sage," said Narada. "We'll call you Valmiki, and the time for meditation is over. Now you must act. Sita awaits you on the bank of the river, and she's about to give birth. Go to her now."

Ratnakar lived by hunting and robbery.
Then he met Narada, who spoke of karma. "Everything you do has consequences."
"But I don't know what to do," Ratnakar told him.
"Meditate on God," said Valmiki. "Do you know Rama?"
"Rama?" said Ratnakar. "I do not know this word."
Narada smiled. "Do you know the word mara?"
"It means tree!" said Ratnkar. And so Ratnakar meditated on "ma-ra-ma-ra-ma-ra-ma" and before he realized it, he was meditating on the name of Rama.
He spent years in that trance. Eventually he emerged. He was then known as Valmiki, and later he composed the Ramayana.
Inspired by: The Complete Life of Rama by Vanamali
Notes: This is in chapter 6 of the book. The Sanskrit word mara means death, but Ratnakar hears the south Indian (Dravidian) word mara, meaning tree.
Posted by Laura Gibbs at 9/19/2020 11:34:00 PM No comments: