25. The Origin of Chimpanzees

The chimpanzee was once a man.
The man got tired of working and took his family into the forest.
They no longer farmed; instead, they foraged for fruits.
Living in the forest, they lost their human intelligence. They became chimpanzees.
Now they imitate things humans do, but they are very foolish.
For example, the chimpanzee builds a house in the trees, but when it rains he gets on top of the roof because he thinks the rain goes up, not down. He tries to get out of the rain by sitting on the rooftop, and instead he just gets wet.
[a Mangbetu story from the Congo]
Inspired by: "The Chimpanzee" in Ten years in Equatoria by Gaetano Casati, 1891.
Notes: You can read the original story online. This is a story of the Mangbetu people; find out more at Wikipedia. 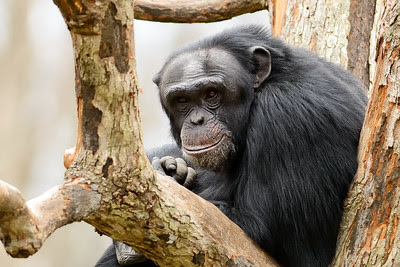