159. The Hornbill and the Yams

The Hornbill gave his wife some yams. "Cook these!" he said.
Then, after she cooked the yams, he said, "You eat them. I will get better food at my mother-in-law's house."
Yet when he reached his mother-in-law's house, they had already finished eating, so Hornbill didn't get anything to eat.
Angry, he flew back home. "Bring me those yams!" he told his wife.
But his wife had eaten the yams as he had told her to do.
That is why Hornbill is always hungry: not content with the food he had, he ended up with nothing at all to eat.
[an Igbo story from Nigeria]
Inspired by: "Apia's Wife and the Yams" in Among the Ibos of Nigeria by George T. Basden, 1921.
Notes: You can read the original story online. The author identifies apia as a bird, while I have also found people who say it is a grasshopper or a lizard. One source identified it as a hornbill, and since the hornbill is a popular folktale character, I went with that option. 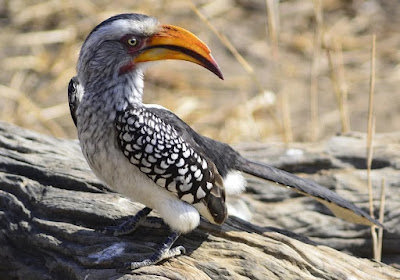