41. The Rabbit and the Lion-Skin

Hyena saw Rabbit wearing a lion-skin.
"Where did you get that lion-skin?" Hyena asked.
"I pulled it right off a living lion," Rabbit said. "You can do it too!"
Hyena chased a lion, but when she tried to grab his skin, the lion started chasing her.
Hyena ran to Rabbit's burrow. "You tricked me!" shrieked Hyena, running into the burrow.
Rabbit ran out the back entrance and sealed it with his lion-skin, so Hyena couldn't get out that way. Then, when she ran back to the entrance, the lion was there, waiting.
Hyena was trapped.
She died in the burrow.
[an Ila story from Zambia]
Inspired by: "Hyena, Incited thereto by Hare, Wants to Wear a Lion Skin" in The Ila-Speaking Peoples Of Northern Rhodesia, Volume 2 by Edwin Smith and Andrew Murray Dale, 1920.
Notes: You can read the original story online. The story also contains this proverb at the end, although it's a bit difficult to express easily in English: So it is said: "A crow doesn't find his Impande unsuitable to wear" (that is, a man can wear his own armour but not another's). [An impande is the round white shell worn as an ornament, and the white-breasted crow is said to wear one.] 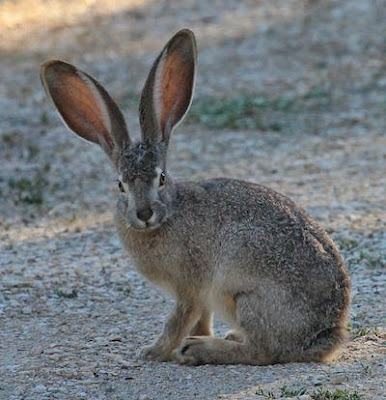