65. The Elephant and the Tortoise

“You’re very short,” Elephant told Tortoise.
“True,” said Tortoise. “But I can jump over you! Come here tomorrow and I’ll show you.”
In the night, Tortoise dug two holes; he hid his brother in one of them.
The next day, Elephant came.
“Stand here,” Tortoise said, placing him between the holes. “Now close your eyes!”
Tortoise hid, while his brother emerged. “Open your eyes! I jumped over,” he said.
Elephant was amazed.
“I’ll do it again,” Tortoise’s brother said. “Close your eyes!”
Then he hid and Tortoise emerged. “Look! I jumped back!”
“You really can jump,” Elephant admitted.
Tortoise smiled.
[a Ndau story from Mozambique]
Inspired by: " Tortoise and Elephant" in Tales and Proverbs of the Vandau of Portuguese South Africa (published in Journal of American folklore) by Franz Boas and C. Kamba Simango, 1922.
Notes: You can read the original story online. 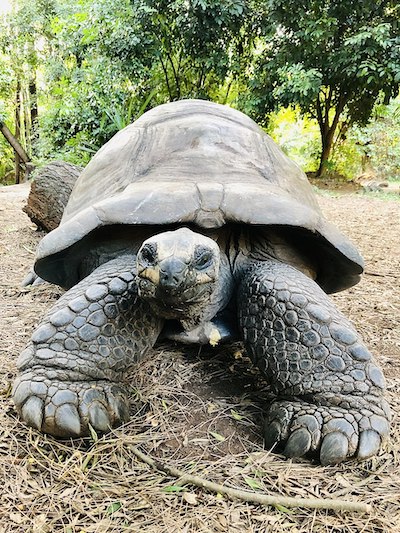