183. The Farmer and the Baboon

A farmer once found an abandoned baby baboon. Feeling sorry for him, the farmer took him home and raised him up to be a shepherd, guarding the sheep by day and driving them back into the kraal at night.
The farmer gave the baboon a goat to ride on, and the baboon lived on that goat’s milk.
Whenever the farmer butchered a sheep, he would give some meat to the baboon, but the baboon himself never killed a sheep.
So things went on happily until a leopard attacked the flock one day and killed the baboon shepherd.
The farmer grieved.
[a Khoekhoe story from Namibia]
Inspired by: "The Baboon Shepherd" in Reynard the fox in South Africa; or, Hottentot fables and tales by Wilhelm Bleek, 1864.
Notes: You can read the original story online. Bleek had the story from a book first published in 1838: James E. Alexander's Expedition of Discovery into the Interior of Africa. This specific story is from Namaqualand. 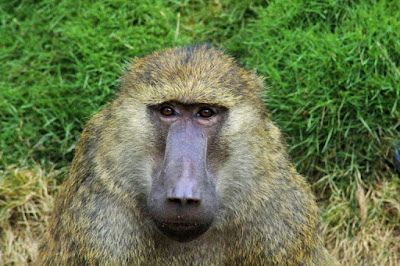