50. The Rabbit, the Hornbill, and the Party

"The horned animals are having a party," said Hornbill.
"Then we'll wear horns!" said Rabbit.
So Rabbit and Hornbill made horns of beeswax and went to the party.
After a while, Hornbill whispered, "Our wax is melting."
"What did he say?" Cow asked Rabbit.
"He said: give us beer," so Cow gave them beer.
"It's really melting," said Hornbill, more loudly.
"What did he say?" Goat asked Rabbit.
"He said: give us wine," so Goat gave them wine.
At last the wax was all gone.
"They don't have horns!" bellowed Buffalo, and then both Rabbit and Hornbill turned and ran.
[an Ila story from Zambia]
Inspired by: "Hare Makes Himself Horns of Beeswax" in The Ila-Speaking Peoples Of Northern Rhodesia, Volume 2 by Edwin Smith and Andrew Murray Dale, 1920.
Notes: You can read the original story online. 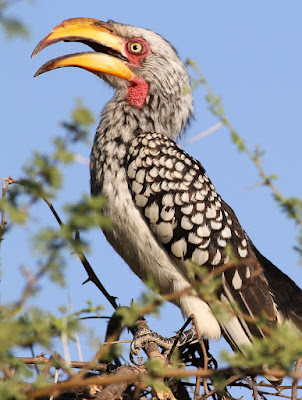