When Ram saw Leopard and Jackal approaching his house, he knew they were coming to eat him. Since he couldn't fight them, he would have to trick them instead.
"Oh look!" shouted Ram. "I'm so hungry, and Jackal has brought me Leopard to eat. Perhaps I will eat Jackal too, because I really am very VERY hungry!"
At those words, Leopard fled in terror.
"Stop, Leopard!" Jackal shouted. "Stop!"
But nothing Jackal said could stop him, and as Leopard ran, Jackal bounced along behind him, tied to Leopard's tail, battered and bruised by the rocks and bushes.
Ram just laughed.
[a Khoekhoe story from Namibia]
Inspired by: "The Leopard and the Ram" in Reynard the fox in South Africa; or, Hottentot fables and tales by W. Bleek, 1864.
Notes: You can read the original story online. Bleek notes that his source was From Sir James E. Alexander's "Expedition of Discovery into the Interior of Africa." This is the continuation of The Leopard and the Ram. 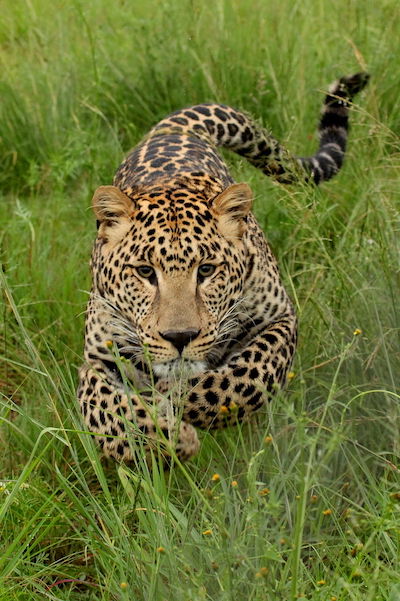