139. The Leopard and the Bloodthirsty Jackal

Jackal watched as Leopard caught, killed, and ate an antelope.
“You are very fierce,” said Jackal, “but no animal is more bloodthirsty than I am!”
Leopard laughed. “Prove it!” he said.
Jackal ran to a field of white pumpkins, stripped off their leaves, and then smashed several pumpkins, smearing the pumpkin’s red pulp all over his face.
“Come see!” he yelled to Leopard.
When Leopard arrived, he thought the smashed pumpkins were skulls and that Jackal’s face was covered with blood. He fled, terrified. “You win, Jackal!” he shouted as he ran away. “You are the most bloodthirsty of all!”
[a Mangbetu story from the Congo]
Inspired by: "The Leopard and the Jackal" in George Grenfell and the Congo, volume 2 by Harry Hamilton Johnston, 1910.
Notes: You can read the original story online. This is a Mangbetu story. And yes, there really are white pumpkins. 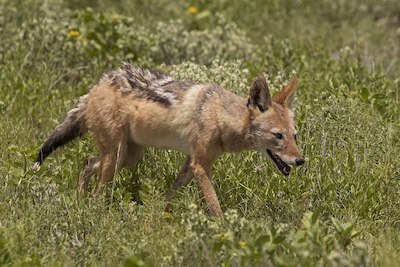