192. Long Ago, When Things Were Bigger

"Things used to be bigger," said one man. "When God created the world, everything was big. I once saw a bird so big it took seven days to fly overhead."
"And I once saw a tree so big all of God's angels couldn't cut it down," said another man. "God gave the angels axes and told them to cut down the tree. They tried for six months and couldn't cut it down."
"Impossible!" protested the first man. "How could a tree be that big?"
"That's the tree God made for your bird to nest in," said the second man, smiling.
[a Vai story from Liberia]
Inspired by: "Rival Storytellers" in Negro Culture In West Africa by George Ellis, 1914.
Notes: You can read the original story online. These are Vai stories from Liberia. 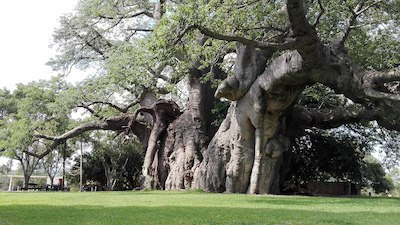