The king let his favorite cattle sleep just outside his palace door, wanting to keep them close.
One night, as the king lay in bed, he heard the ghosts of the former kings arguing.
"I will no longer come here!" one of them shouted. "The filth that these cattle leave by the door soils the hem of my robes."
The other dead kings pleaded with him. "The living need our guidance."
"No! The cattle must go, or I won't return."
In the morning, the living king sent the cattle away, not wanting to offend the ghosts of the former kings.
[a Nyoro story from Uganda]

Inspired by: "Kamrasi and the Cows" in The Bakitara or Banyoro by John Roscoe, 1923.
Notes: You can read the original story online. The original story also has this fascinating coda: "These ghosts finally ceased to visit the king when Kabarega introduced guns, and it was said they were afraid of them because of the noise they made." 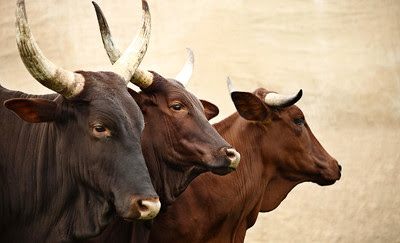