65. The Tortoise and His Kola-Nuts

Tortoise had feasted on kola-nuts and was sitting at the foot of his kola-tree, empty shells strewn all around him.
Then Chief Leopard walked by.
"Help!" yelled Tortoise. "Someone has been eating my kola-nuts."
Leopard believed Tortoise and summoned the animal village. "We must punish the criminals who ate Tortoise's kola-nuts!" he proclaimed.
After the animals assembled, Tortoise told Leopard, "Feelings of guilt will make the criminals tremble." Then Tortoise pointed to the sheep, who were trembling with fear already.
"Sheep," said Leopard, "explain yourselves!"
"We're innocent," bleated the Sheep, but because they were trembling, Leopard seized and ate them.
[a Bulu story from Cameroon]
Inspired by: "Why the Sheep Are Always Found Guilty" in Bulu Folk-Tales (in Journal of American Folklore) by George Schwab, 1919. The Bulu are a people who live in Cameroon.
Notes: You can read the original story online. 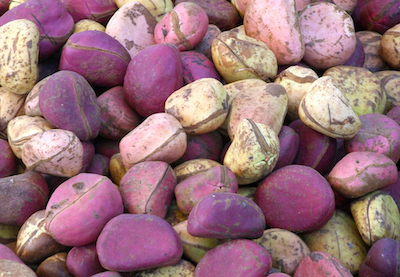