There was a woman without a husband. Many suitors came, but the woman was proud, and she refused them all.
A baboon saw this woman and wanted to marry her, so he took off his baboon-skin and put on a man-skin.
The woman chose that man to be her husband and married him.
He worked hard, planting crops in his mother-in-law’s garden and tending the garden carefully.
But his fellow baboons came out of the bush and raided the garden, taking all the food. Then the husband became a baboon again and ran off into the bush, never to return.
[a Ngoni story from southern Africa]
Inspired by: A story summarized by Alice Werner in The Natives of British Central Africa, 1906.
Notes: You can read the original story online. I will update this post if/when I find out more about Werner's source. This is a legend of the Ngoni people. 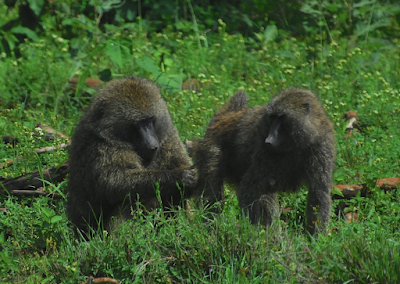