In the King’s palace, Cat was the royal steward, and Rat the royal janitor.
Rat fell in love with a housemaid, but because he was poor, he had nothing to give her. Desperate to prove his love, he crept into the storeroom and stole some pears which he gave to the housemaid.
When the King learned the pears were missing, he immediately blamed Cat, his steward.
Then, when Cat discovered Rat stole pears for the housemaid, Cat denounced them both to the King.
The King flogged the housemaid, while Cat killed Rat.
Cat and Rat are enemies to this day.
[a story from southern Nigeria]
Inspired by: "Why the Cat kills Rats" in Folk stories from southern Nigeria, West Africa by Elphinstone Dayrell, 1910.
Notes: You can read the original story online. 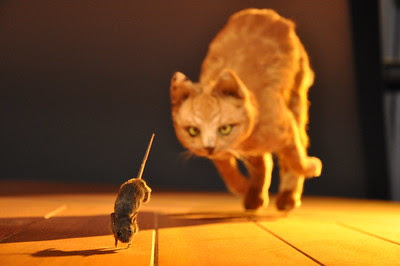