100. The Squirrel and the Python

Python and Squirrel were friends and even shared a nest, but then Python ate Squirrel's children.
"If you eat my children again," Squirrel said, "I'll kill you."
Python just smiled and nodded, confident Squirrel could not harm him.
Time passed, and Squirrel had more children. Then one day she returned to her nest and the children were gone.
"Where are my children?" Squirrel cried.
Python slithered down to the ground and said, "I don't know."
Squirrel squeaked and chattered until a hunter came and, seeing Python at the foot of the tree, the hunter killed him.
That was Squirrel's revenge.
[a Bulu story from Cameroon]
Inspired by: "Akpwe Viper Pays for His Deception" in Bulu Folk-Tales (in Journal of American Folklore) by George Schwab, 1914. The Bulu are a people who live in Cameroon.
Notes: You can read the original story online. In the original story, each of the Squirrel's children has a name, and the snake eats them one by one. The original story calls the snake a "viper," but I made it a python instead. For a story without squirrel's revenge, see: Squirrel and Viper's Nest. 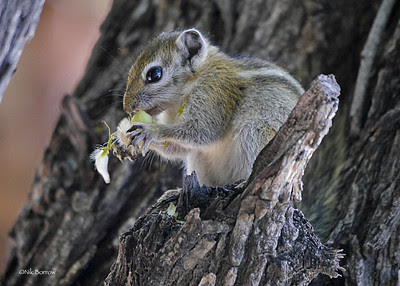