40. The Rabbit and the Lion Play a Game

"Let's play a game!" Lion said to Rabbit.
"How about Swallow-the-Stone-and-Vomit-It-Out?" replied Rabbit.
"I don't know that game," said Lion.
"Climb this tree and throw a stone down. I'll catch it, swallow it, and vomit it."
While Lion climbed, Rabbit chewed some leaves. Then, when Lion threw the stone, Rabbit jumped aside, spitting leaves on the stone.
Lion thought Rabbit had really swallowed and vomited the stone.
"Now you!" said Rabbit. "Open wide!"
When Rabbit threw the stone into Lion's open mouth, it broke all his teeth.
Lion died.
"Poor Lion!' said Rabbit. "He should have opened his mouth wider."
[an Ila story from Zambia]
Inspired by: "Hare Breaks All Lion's Teeth and so Kills Him" in The Ila-Speaking Peoples Of Northern Rhodesia, Volume 2 by Edwin Smith and Andrew Murray Dale, 1920.
Notes: You can read the original story online. 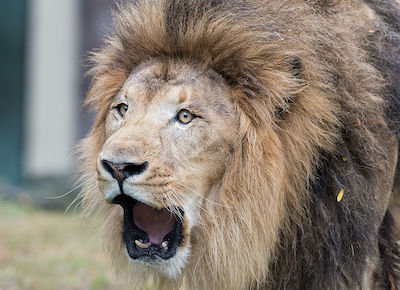