139. The Antelope and the Monkey

Monkey had climbed up a tree and was throwing fruit down for Antelope.
"This fruit is delicious!" said Antelope.
"I'm glad you like it," said Monkey. "But listen! I hear hunters coming. You better run."
"Not yet," said Antelope. "Give me more fruit."
"They're getting closer," warned Monkey. "I can see them!"
"Don't worry!" said Antelope. "I'm not afraid. There's still plenty of time to escape."
So Antelope kept on eating the fruit.
Then when Antelope finally decided to run, it was too late; the hunters had surrounded him. He ran straight into a net, and the hunters killed him.
[a Mongo story from the Congo]
Inspired by: "The Antelope Underneath the Monkey" in Mongo proverbs and fables by E. A. Ruskin, 1921.
Notes: You can read the original story online. This is the "bofala" antelope, also known as Peters' Duiker. I made the monkey and duiker friends, which was not explicit in the original story. 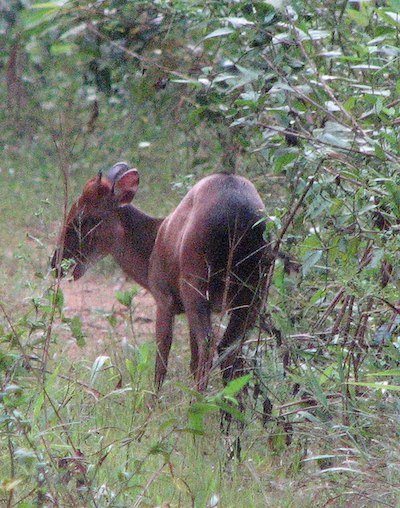