A man cut down some trees, but when he returned the next day, the trees had grown back.
He cut the trees down again; again they grew back.
The third day, a korhaan appeared, singing:
"Trees, wake again! Awake! Awake!"
Then the man killed the bird, and the dead bird shouted, "Kill me properly!"
He picked it up. "Pick me up properly!" it shouted.
He took it home and plucked it. "Pluck me properly!" it shouted.
He cooked it. "Cook me properly!" it shouted.
He invited his friends to eat. "Eat me properly!" it shouted.
All who ate became birds.
[a Nyanja story from Zimbabwe]
Inspired by: "The Khorhaan" in Folklore of the Banyanja (published in Folklore) by Madeleine Holland, 1916.
Notes: You can read the original story online. The korhaan is a type of bustard found in southern Africa. This is one of my favorite African folktale types; as I accumulate more examples I'll link them here, along with a similar type of story told about fish. For the bird who undoes human agricultural labor, see The Bird That Made Milk. 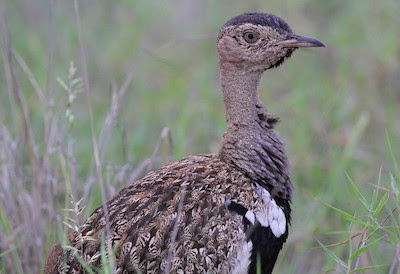 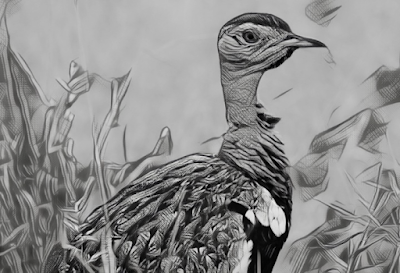