6. The Crocodile and the Leguan Lizard

When Crocodile and Leguan were first created, they didn’t have tongues.
Then the Creator made two tongues and said to Crocodile and Leguan, “You two are going to run a race. I have put both tongues at the finish line. The winner of the race will get two tongues, and the loser will not get any tongue at all.”
Crocodile was bigger and stronger than Leguan, but Leguan was faster than Crocodile, and he reached the finish-line first.
That is why Crocodile now has nothing but a sort of stump in his mouth, while Leguan has a long double tongue.
[a Bantu story from southern Africa]
Inspired by: "The Crocodile and the Iguana" in Bantu Customs and Legends published in the journal Folklore by James Macdonald, 1892.
Notes: You can read the original story online. Although the text says "iguana," I'm fairly certain the author means the South African monitor lizard, leguan, which is also called guana and has a long, forked (double) tongue. Crocodiles do have tongues, but they are fixed in place, so crocodiles cannot stick their tongues out. Here is a leguan sticking out its long, forked tongue: 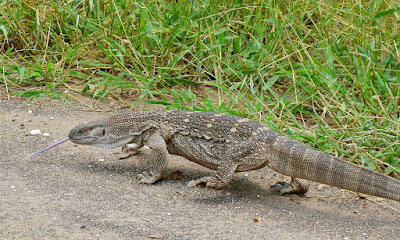