85. The Leopard and the Goat

Leopard caught Goat in the forest.
"Tell me three truths," said Leopard, "and I'll let you live."
"You aren't hungry, or else I'd be dead already."
"True!" said Leopard.
"I wish I'd traveled a different path today."
"Surely true."
"Nobody will believe I met Leopard and lived."
"Also true," said Leopard. "So I suppose I must kill you!"
"I demand a witness," pleaded Goat. "Let me go fetch Dog."
So Goat went to the village to fetch Dog... and never came back.
Leopard sent Cat to fetch Goat... but Cat never came back.
Now Leopard hates both Goat and Cat.
[a Vai story from Liberia]
Inspired by: "The Leopard and the Goat" in Negro Culture In West Africa by George W. Ellis, 1914.
Notes: You can read the original story online. This is a Vai story from Liberia. I am not quite sure what Goat means about the medicine when he speaks with Dog in the original story: The Goat went and told the Dog that the Leopard had said, “We must go and make medicine for him.” “No, I am not going anywhere,” replied the Dog: “the Leopard does not know me.”"
There is an Aesop's fable, Perry 159, attested in Greek, in which a wolf challenges a sheep (or a fox) to tell three true things, and despite the defiant truths, he has to admit the sheep fulfilled the challenge and lets it go (the fate of the fox is not told). 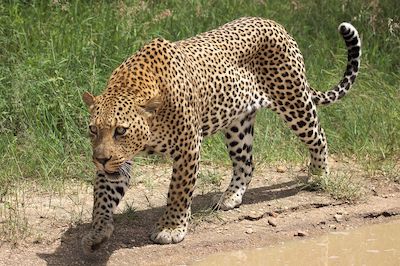