There was a famine.
Squirrel and his family were hungry, so when Squirrel found a nut, he grabbed it.
"Please," said the nut, "let me go!"
"No!" said Squirrel.
At just that moment, a hunter shot at Squirrel.
Squirrel dropped the nut and scurried into his hole.
The hunter then wove a trap from tree fiber and laid it at the hole's entrance; the trap caught Squirrel when he ventured out.
"Please," said Squirrel, "let me go!"
"No!" said the trap. "You showed no mercy to the nut, and I'll show none to you."
The hunter came and killed Squirrel.
[a story from Liberia]
Inspired by: "Possum and Palm-nut" in Folktales from Liberia (in Journal of American Folklore) by Richard C. Bundy, 1919.
Notes: You can read the original story online. There are no opossums in Liberia, but there are ground-squirrels, so that's what I've used here in the story. The story hints at the idea that the palm-nut tries to trick squirrel into putting him down, although that part of the story is not really well developed. The original story also has the hunter telling the story to people with this lesson: "Never abuse a man who is in your power; fortune may some day reverse conditions." For another talking trap, see this Igbo story from Nigeria: The Rat and the Fish. 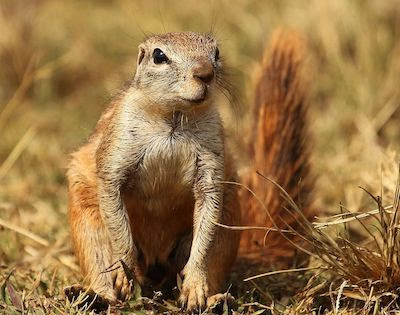 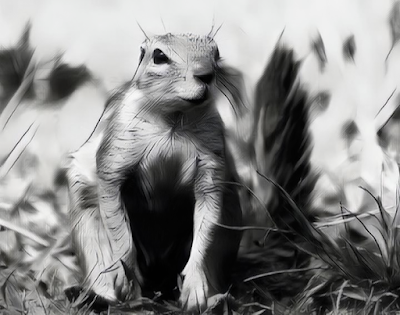