67. The Tortoise and the Leopard Go Hunting

Tortoise went hunting with Leopard, and they caught a hyrax.
They butchered the hyrax, but before they carried the meat home, Tortoise said, "I'm so hungry! Let's roast the liver now."
Leopard agreed.
Then Tortoise secretly stuffed the gall-bladder and bitter herbs into the roasted liver.
"Here," he told Leopard, "you go first."
Leopard bit into the liver and spat it out. "This meat is no good! The hyrax is spoiled."
"We'll have to throw it away," said Tortoise sadly.
Tortoise threw the meat away, but later he returned and took it home.
So Tortoise got everything; Leopard got nothing.
[a Bulu story from Cameroon]
Inspired by: "How Turtle Got All Leopard's Food" in Bulu Folk-Tales (in Journal of American Folklore) by George Schwab, 1919. The Bulu are a people who live in Cameroon.
Notes: You can read the original story online. The story also contains Tortoise acting deceitfully with Leopard earlier in the story, along with a plea for mercy from Hyrax interrupted by Tortoise, who kills Hyrax with his spear. 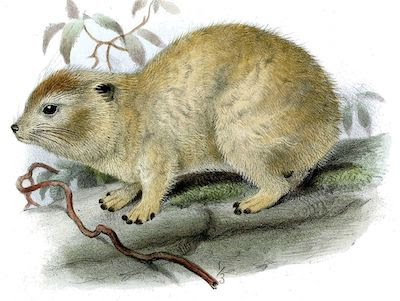