“You are a fool, Goat,” said Jackal, “living with chickens instead of eating them! Let the chickens out, and I’ll show you how it’s done.”
Goat let the chickens out of the coop, and Jackal ate all the chickens.
Then one day Jackal jumped down in a water-hole and couldn’t get out.
“This water is so good, Goat!” he yelled. “Come try it!”
Goat jumped down, and then Jackal leaped up on Goat’s horns to get out.
The next time Jackal came to the farm, Goat chased him away.
Now Jackal has to steal chickens; Goat won’t help him anymore.
[a story from Ghana]
Inspired by: "The Fox and the Goat" in We Two in West Africa by Decima Moore and F. G. Guggisberg, 1909.
Notes: You can read the original story online. The author notes: "Why a fox I do not know, as I believe none exist on the Coast [Ghana], but James's education and the English story books he had read had probably lead to his applying the name to a wild cat or jackal or one of the smaller wild animals of the bush. The story illustrates the contempt which the native has for the intelligence of the goat, who, living among the chickens in the villages, cannot find anything better to eat than the garbage thrown in the street, and also accounts for the “fox" residing permanently in the bush." I have used jackal as the chicken-eating animal. The second part of the fable parallels Aesop's fable about the fox and the goat. 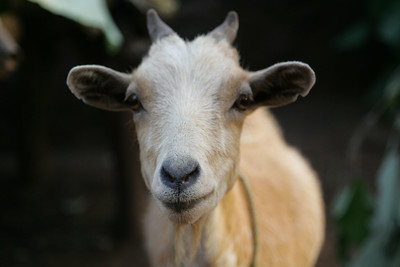