The birds called a council to choose their king.
Owl didn't come; instead, he stayed at home with his wife, so the birds declared Owl an outcast. Now Owl comes out only at night, fearful of the other birds.
Hawk wanted to be king, but the birds rejected him. This made Hawk angry, and now he is an enemy to other birds, always attacking them.
The birds chose Drongo as their king because he sounded like a king with his beautiful song and he looked like a king with his tall feather crest.
So Drongo is king of the birds.
[a story from Madagascar]
Inspired by: "The Birds Agreeing to Make a King" in Oratory, Songs, Legends, and Folktales of the Malagasy (published in Folklore) by James Sibree, Jr., 1883.
Notes: You can read the original story online. The author identifies the bird as railòvy, Dicrurus forficatus, also known as the crested drongo. 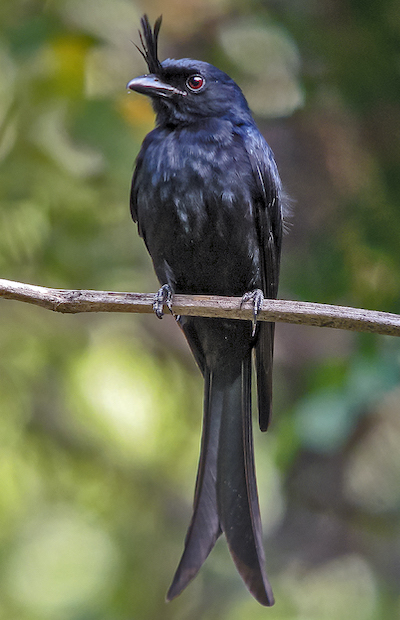