110. The Elephant and the Rabbit Plant Pumpkins (1)

Elephant and Rabbit were friends.
“Let’s grow pumpkins!” Rabbit said.
“I like to eat pumpkins,” said Elephant, “but I don’t know how to grow them.”
“Don’t worry!” said Rabbit. “I’ll teach you how. The secret is to roast the pumpkin-seeds before planting.”
Elephant bought some pumpkin-seeds, roasted them, and planted the roasted seeds in the ground.
Rabbit, however, roasted only a few of his pumpkin-seeds, which he ate, and then he planted the un-roasted seeds in the ground.
When Elephant saw that Rabbit’s garden was full of pumpkins while his own garden was empty, he realized Rabbit had tricked him.
[a Yao story from Malawi]
Inspired by: "The Roasted Seeds" in Africana by Duff Macdonald, 1882.
Notes: You can read the original story online. This is a legend of the Yao people of Malawi. In the next story, Elephant gets his revenge: Elephant Steals Rabbit's Pumpkins. 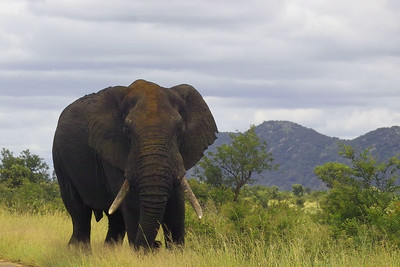