The King sent Dove to bring the Moon, and Bat the Sun.
Dove flew quickly, and the Moon arrived first.
“I grant you the honors I’d planned for the Sun,” said the King. “You will rule the night, and people will drum and tell stories by your light.”
Because Bat dawdled, the Sun arrived later.
“I gave your honors to the Moon,” the King explained, “but you will rule the day and shine on people as they walk about.”
The Sun was furious. “We’re enemies now!” he told Bat.
So Bat looks down by day and flies only at night.
[a Baganda story from Uganda]
Inspired by: "Why the Bats Hang Head Downwards and Only Fly by Night" in The Baganda by John Roscoe, 1911.
Notes: You can read the original story online. For more about the Baganda people, see Wikipedia. 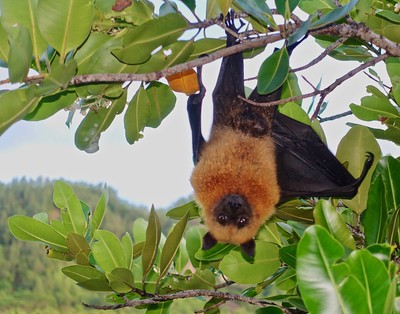