A hunter had just shot a zebra when a lion rushed up and grabbed the zebra from him. Terrified, the hunter climbed a tree.
The wounded zebra managed to escape, so the hungry lion then paced around the tree. Night came; the lion was still there, guarding the tree.
The hunter eventually fell asleep and dreamed he had fallen into the lion's mouth. Thrashing in his sleep, he fell and landed on the lion. The startled lion ran away, thus allowing the hunter to make his own escape by running in the opposite direction.
Hunter, zebra, lion: they all lived.
[a Khoekhoe story from Namibia]
Inspired by: "The Lion and the Bushman" in  in Reynard the fox in South Africa; or, Hottentot fables and tales by Wilhelm Bleek, 1864.
Notes: You can read the original story online. Bleek had the story from a book first published in 1838: James E. Alexander's Expedition of Discovery into the Interior of Africa, volume 2, p. 51. The story comes from Namaqualand, and Alexander told it about a "Boschman" (Bushman) hunter. 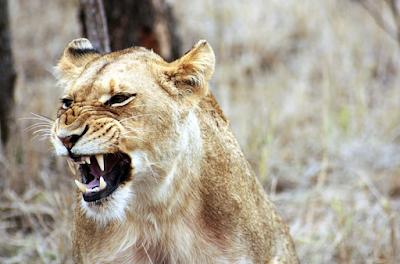