At first, there was no death.
Then someone got sick and died.
The people told Dog, “Go ask God what to do.”
Dog went and talked with God, but dawdled coming back.
When Dog didn’t return, the people sent Sheep.
Sheep returned and told them, “God says: bury the dead.”
Later, Dog returned. He told them, “God says: put warm ashes on the person’s body, and they’ll rise again.”
But Dog’s message came too late; the dead body was already in the ground.
The people were angry and drove Dog away.
Because of Dog, the dead do not rise again.
[a Calabar story from southern Nigeria]
Inspired by: "The Dog Carrying a Message from God" in Calabar Stories by J. Maxwell, published in the Journal of the Royal African Society, 1906.
Notes: You can read the original story online. This theme of the "message about death" shows up in many different forms in folktales all over the continent. See, for example, this story about the Moon and the rabbit: Rabbit Brings Death to the World. Calabar is in southern Nigeria: Wikipedia. 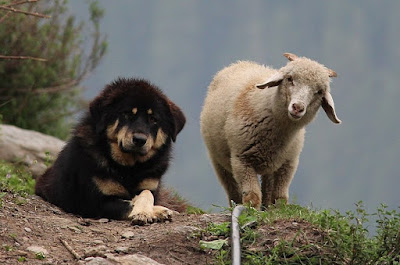