At first, there were three creatures: Thunder, Elephant, and Man.
“Beware of Man,” Thunder told Elephant. “He’s dangerous. I’m going to the sky to escape Man. Come with me!”
“Man is very small,” said Elephant, laughing. “I don’t fear him.”
When Thunder went to the sky, Man rejoiced. “Thunder, whom I feared, is gone at last!”
Then Man made a bow and arrow, dipped the arrow in poison, and shot Elephant with the arrow.
Elephant groaned. “Take me up, Thunder!”
“No,” said Thunder. “I tried to warn you, but you wouldn’t listen.”
So Elephant died, and Man ruled the earth.
[a Nandi story from Kenya]
Inspired by: "The Story of the Creation" in The Nandi, their language and folk-lore by Alfred C. Hollis, 1909.
Notes: You can read the original story online. The man of that time was a Dorobo; more about Doroba people at Wikipedia. In the original story, Thunder explains that man is dangerous because he can turn over in his sleep without getting up, while Thunder must get up to turn over; Elephant says the same. 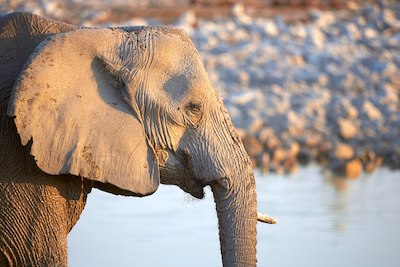