There was a man who slept all day. He did no work.
Finally, the people drove him away. "Go to the forest!" they said.
He went into the forest... and fell asleep.
While he was sleeping, a python ate him.
Then a crocodile ate the python.
Then a hippo ate the crocodile.
Next, a hunter killed the hippo. He cut the hippo open, found the crocodile, cut the crocodile open, found the python, cut the python open, and awoke the sleeping man.
"What's happening?" the man asked.
"Don't you remember?" replied the hunter.
"No," said the man. "I was asleep."
[a Temne story from Sierra Leone]
Inspired by: "The Sleepy Men" in Anthropological report on Sierra Leone: Stories by Northcote Thomas, 1916.
Notes: You can read the original story online. These are Temne stories, and the Temne text is available there. In the original story, there are actually two sleepy men. One gets swallowed by the python, etc., while the other is sleeping in the bush which the people set on fire, then rake, etc. Hippos really will fight with crocodiles, but they don't eat them: Do Hippos Eat Crocodiles? 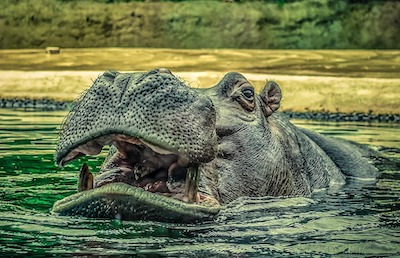