An ogre possessed the world's only kola-tree.
A brave man took a basket. "I will steal those kola-nuts," he told his two dogs. "You stay here," and he tied them.
As he climbed the tree, the ogre sensed his presence. "Human!" it shouted. "I'll chop down this tree and eat you."
"Let me pray to God first," said the man, who then called to his dogs.
The dogs broke their chains and ran.
The dirt their paws threw behind them became mountains.
They tore the ogre to pieces.
Then the man scattered the kola-nuts, and now there are kola-trees everywhere.
[a Temne story from Sierra Leone]
Inspired by: "The Man and the Krifi" in Anthropological report on Sierra Leone: Stories (Temne) by Northcote Thomas, 1916.
Notes: You can read the original story online, with the Temne text. The ogre is called "krifi" but the dog's names are not given. There is also a story about the spider and the krifi. These supernatural beings can also reside in stones and other objects; here is a box of krifi stones at the British Museum. 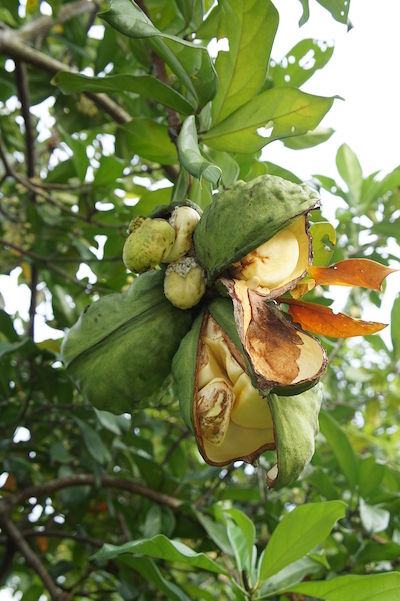