51. The Rabbit, the Hornbill, and the Bread

Hornbill and Rabbit were traveling together, and each had some bread.
At the river Rabbit said, "To cross safely, we must give the river our bread."
Hornbill threw his bread into the river, but Rabbit secretly kept his, throwing a rock instead.
After crossing, Rabbit pretended to find his bread, "Look! The river returned my bread."
"But not mine," said Hornbill sadly.
Later, Hornbill begged Rabbit for bread. "I'm so hungry!" he said.
"Trade me your spear," said Rabbit.
So Rabbit got Hornbill's spear, and in exchange Hornbill got only a little bread, not even enough to fill his stomach.
[an Ila story from Zambia]
Inspired by: "Hare Plays a Trick on Ground Hornbill" in The Ila-Speaking Peoples Of Northern Rhodesia, Volume 2 by Edwin Smith and Andrew Murray Dale, 1920.
Notes: You can read the original story online which features two of the praise-names used for the rabbit. 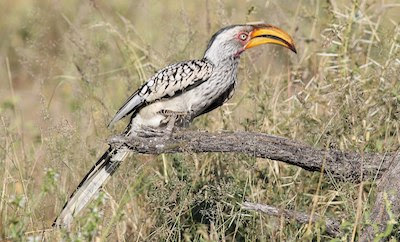