196. The Tortoise and His Debts

Tortoise owed money to all his friends.
“Pay me!” Worm said.
“Wait here,” Tortoise replied, and went to Rooster.
“Pay me!” said Rooster.
“Come with me!” replied Tortoise.
Rooster came, ate Worm, and waited for his money.
Then Tortoise went to Wildcat.
“Pay me!” said Wildcat.
“Come with me!” Tortoise replied.
Wildcat came, ate Rooster, and waited for his money.
Then Tortoise went to Leopard.
“Pay me!” said Leopard.
“Come with me!” replied Tortoise.
Leopard came and attacked Wildcat. They fought fiercely and killed each other in the struggle.
Then Tortoise laughed and ate them both.
He didn’t pay anybody.
[a Calabar story from southern Nigeria]
Inspired by: "Tortoise's Creditors" in Animal Stories from Calabar (published in the Journal of the Royal African Society) by Henry Cobham, 1905.
Notes: You can read the original story online. 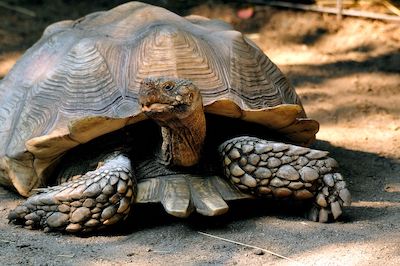