Two hunters rode into the wilderness, searching for game.
"I could kill you right here," one said, "and nobody would know."
"God would know," replied the other.
"Then may God help you!" shouted the first, and he slit his companion's throat.
Where the dead man's blood fell onto the ground, enormous vines grew, and on those vines grew enormous grapes. Then the grapes burst, and birds emerged. These birds had the power of human speech, and wherever they flew they denounced the murderer and his crime.
Thus people learned the truth about what happened and sentenced the murderer to death.
[a story from northeastern Algeria]
Inspired by: "Two Arab Hunters" in Algerian Folktales (published in Folklore) by M. W. Hilton-Simpson, 1924.
Notes: You can read the original story online. The author collected this story from an Arab storyteller in El Kantara to the north of Biskra in northeastern Algeria. 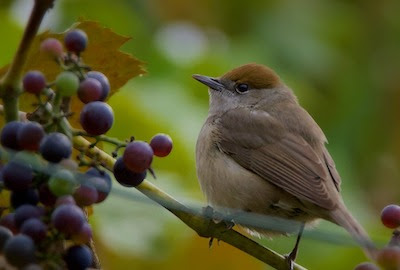