108. The Elephant and the Spider

Elephant was tired of Spider’s tricks. She wanted revenge! So Elephant went looking for Spider.
Meanwhile, Spider found a dried-up antelope skin and put it on. Then he stood on the path near Elephant’s house.
When Elephant walked by, she said, “Antelope! What happened to you? You look terrible.”
Spider imitated Antelope’s voice. “I fought with Spider,” he said, moaning and groaning. “And just look at me now! I fear… the end… is near…”
Spider fell down, and Elephant thought Antelope was dead. “Poor Antelope!” she said.
This made Elephant afraid of Spider; she didn’t go looking for him anymore.
[a Hausa story from northern Nigeria]
Inspired by: "The Spider, the Hippopotamus, and the Elephant" in Fifty Hausa Folktales by A. J. N. Tremearne, 1910.
Notes: You can read the original story online. The specific trick that Elephant is angry about is when Spider provoked a quarrel between Elephant and Hippopotamus which led to a tug-of-war; in this version, Spider doesn't claim to be stronger; instead, he stirs up trouble between the two big animals by claiming they were boasting about being the strongest. The specific type of antelope in the story is an oribi. 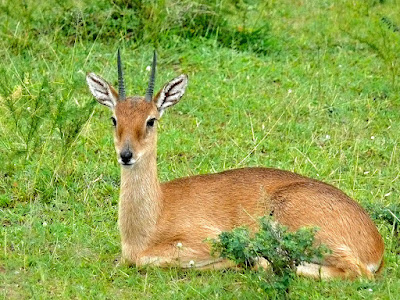