57. The Rabbit and the Tortoise Run a Race

"Let's race!" Rabbit said to Tortoise, and Tortoise agreed.
That night, Tortoise hid his friends in the bushes all along the track and at the starting-post. "All Tortoises look alike to Rabbit," he told them.
When the race started, Rabbit dashed ahead. Laughing, he glanced back and shouted, "Look at me, Tortoise!"
"No, look at me!" said a Tortoise, sticking his head out of the bushes in front of Rabbit.
Rabbit ran faster.
"Not fast enough!" said another Tortoise ahead of him.
When Rabbit reached the finish-line, there was Tortoise!
"You really do run fast," gasped Rabbit.
Tortoise just smiled.
[a San story from southern Africa]
Inspired by: "The Rabbit and the Tortoise" in The Tati Bushmen (Masarwas) and their Language (in Royal Anthropological Institute of Great Britain and Ireland) by S. S. Dornan, 1917.
Notes: You can read the original story online. There is a version of the tortoise/substitutes racing the hare in this story from Uganda: Hare is Outwitted by Mrs. Tortoise. 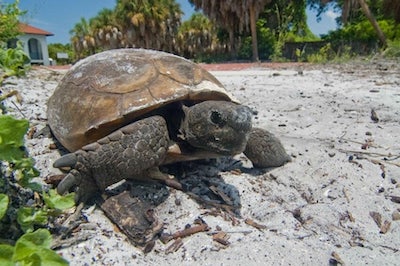 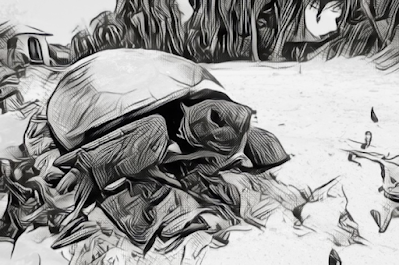