The mice called a council. "We must do something about the cat!" they squeaked.
"Let's tie a bell on her neck," one mouse proposed. "That will warn us she's coming!"
All the mice applauded and then went to see Grandfather-Mouse.
"What have you decided?" Grandfather-Mouse asked them.
"We will tie a bell on the cat!" they replied.
"Good!" said Grandfather-Mouse. "And who will catch the cat and tie the bell on?"
The mice looked at one another in confusion.
"We didn't think about that," they said sadly.
Hence the saying: It came to nothing, like the council of the mice.
[a Tigray story from northern Ethiopia]
Inspired by: "The Tale of the Council of the Mice" in Tales, Customs, Names, and Dirges of the Tigre Tribes by Enno Littmann, 1915.
Notes: You can read the original story online. This is known as an Aesop's fable, but it is not attested in the classical Aesopic corpus; instead, it is part of the later medieval Aesopic tradition. I used an Aesop's illustration for this one. 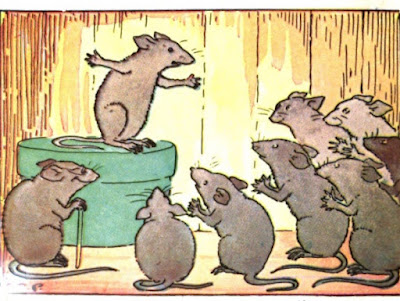