67. The Chameleon and the Elephant

“You may be big,” Chameleon told Elephant, “but I’m fast. Let’s race!”
That night, Chameleon went to all his brothers and arranged them along the race track.
The next day, the race began. Elephant charged ahead as fast as he could. Imagine his surprise when he saw Chameleon ahead of him!
Elephant ran faster.
Then he saw Chameleon ahead of him again. “Aren’t you tired?” Elephant gasped.
Chameleon laughed. “Not at all!”
Elephant ran and ran until he couldn’t run anymore.
“You win, Chameleon!” he said. “You really can run faster than me.”
Elephant never realized that Chameleon tricked him.
[a Mangbetu story from the Congo]
Inspired by: "The Elephant and the Chameleon" in George Grenfell and the Congo, volume 2 by Harry Hamilton Johnston, 1910.
Notes: You can read the original story online. This is a Mangbetu story. 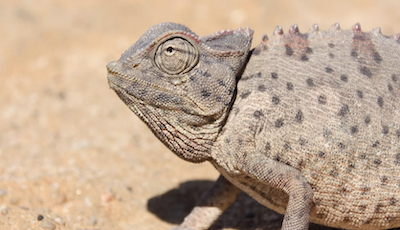