34. The Messages of the Chameleon and the Lizard

God told Chameleon, "Take this message to the people: you will multiply and not die."
Lizard overheard, and he went running faster than Chameleon, who was very slow.
"O people," Lizard announced, "hear God's message: you will multiply, but you will die."
"We hear you, Messenger of God," the people replied.
Later, Chameleon arrived, and he said to the people, "Hear God's message: you will multiply and not die."
"You're lying!" the people replied. "God's messenger arrived already. We will multiply, and we will die."
The people thought Lizard told them the truth, all because they heard his message first.
[a Giriama story from Kenya]
Inspired by: "The Origin of Death" in Giryama Vocabulary by W. E. Taylor, 1891.
Notes: You can read the original story online, and also the Giryama text. The lizard is called "Mugakha" in the text. You can find out more about the Giryama people of eastern Africa at Wikipedia. This Tswana version emphasizes the Chameleon's awkward gait: Lizard and Chameleon. 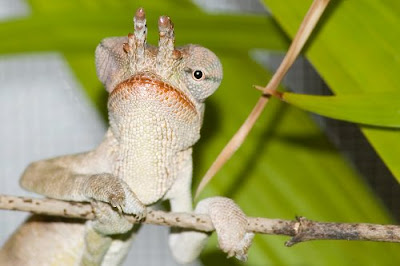