79. The Woman and the Rabbit

A woman needed a nanny for her baby.
“I love babies,” said Rabbit. “I’ll be your nanny.”
But Rabbit got bored while babysitting.
Meanwhile, something smelled good… He went into the kitchen and peeked in the cooking-pot: there was goat stew!
Rabbit ate the stew.
All of it.
Then he realized the woman would be mad when she got home and found the stew all gone, so he cut the baby up and made more stew.
Rabbit left her a note: “Took the baby out for a walk.”
The parents came home and ate the stew.
Rabbit never came back.
[a Nandi story from Kenya]
Inspired by: "The Hare who Acted as Nurse" in The Nandi, their language and folk-lore by Alfred C. Hollis, 1909.
Notes: You can read the original story online. The story also contains reference to Rabbit using a buzzing insect to fool the woman, but that part of the story is not very well told in this version so I replaced that with Rabbit leaving a note; I'll be able to include the insect motif in another story since it shows up in other stories of this type. 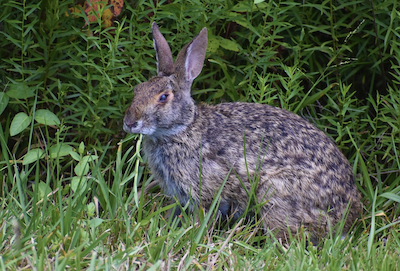