3. The Warthog and the Elephant

Warthog went with his uncle, Elephant, to drink water.
Warthog drank first. As he was drinking, he stirred up the water.
Then Elephant drank, and a leech got inside his trunk. "It's a leech!" Elephant screamed. He beat his trunk on the ground and bashed it against a rock; nothing helped. The leech hung on, and blood streamed everywhere. Finally Elephant died.
"Because my uncle's dead, I am now the great one!" Warthog proclaimed.
He took his uncle's tusks; that is how Warthog got his tusks.
Over time, Elephants became bigger and Warthogs became smaller, but Warthog still has tusks.
[an Ila story from Zambia]
Inspired by: "Why the Elephant is Distinct from the Wart-Hog" in The Ila-Speaking Peoples Of Northern Rhodesia, Volume 2 by Edwin Smith and Andrew Murray Dale, 1920.
Notes: You can read the original story online. The author provides a detailed account of how a leech can indeed kill an elephant, and thus the elephants' caution when drinking. 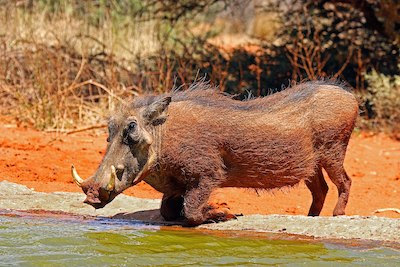