The Tortoise and the Porcupine

Tortoise and Porcupine were friends.
One day Tortoise got a jigger-flea in his foot. "Help me, Porcupine!" he said.
Porcupine gave him a thorn, and another, and another. Tortoise liked none of them.
"Give me a quill from your back," he said, so Porcupine gave him a quill, although it pained him to do so.
Then Porcupine told Tortoise, "I need to grind tukula. Give me a bowl!"
Tortoise gave him a bowl, and another, and another.
"Give me the bowl from your back!" insisted Porcupine.
When Tortoise removed the bowl from his back to give to Porcupine, he died.
Inspired by: "How Porcupine Got Even With Turtle" in Bulu Folk-Tales (in Journal of American Folklore) by George Schwab, 1914. The Bulu are a people who live in Cameroon.
Notes: You can read the original story online. There is a tukula mortar you can see at the The Met online. 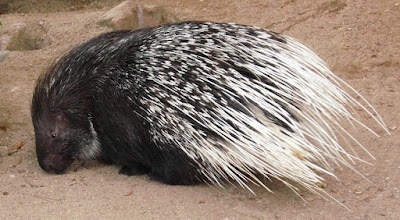