A man had two sons.
“Give us a bow!” they said.
He gave them a bow. “You mustn’t shoot one another,” he said.
But the boys quarreled. One boy picked up grass and shot the grass at his brother. The grass struck the boy and killed him.
“You killed your brother!” the father shouted.
“I did not kill him,” said the boy. “The grass killed him.”
“Yes, I killed him,” said the grass sadly, “and I don’t want to stay down here anymore.”
The grass flew up into a tree and became a bird.
That is the origin of birds.
[a Yao story from Malawi]
Inspired by: "Birds" in Africana by Duff Macdonald, 1882
Notes: You can read the original story online. Macdonald collected these stories from the Yao people at the Blantyre Mission in Malawi. 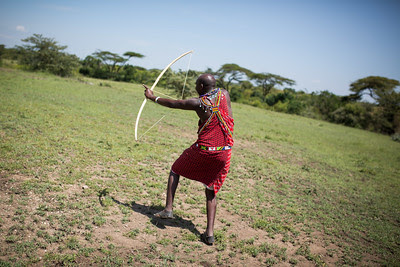