Rabbit noticed Bushbuck was looking thin. "What's wrong?" he asked. "Are you sick?"
"No," said Bushbuck. "I've been giving all my food to Spider. Otherwise, he'll spit on me."
"So what?" said Rabbit. "His spit hurts insects, but not big animals like us. I'll show you!"
Rabbit waited at Bushbuck's house and when Spider arrived for his meal, Rabbit said, "Go away!"
"Watch out!" shouted Spider. "I'm going to spit!"
"Spit all you want," said Rabbit, laughing.
Spider spit.
Nothing happened.
The more Spider spit, the more Rabbit laughed.
Then Bushbuck slammed the door.
He wasn't afraid of Spider anymore!
[a Temne story from Sierra Leone]
Inspired by: "Mr. Spider and the Rotten Skin" in Anthropological report on Sierra Leone: Stories by Northcote Thomas, 1916.
Notes: This is a continuation of: Spider's Disguise. 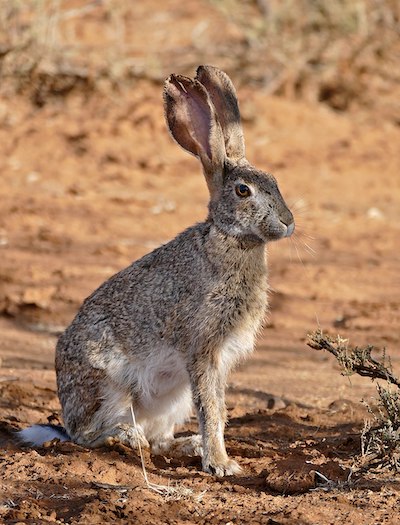