23. The Chief and His People

There was once a tribe, and their chief had the power to bring rain.
Then, the rain stopped falling.
The people complained, but the chief shouted, "I am the chief! You, go and chop down trees! You, go and plow!"
When the rain still did not come, the people stopped chopping down trees and stopped plowing.
In the sunshine, a large, flat stone grew red-hot, and when the people sat there, it burned off the skin from their behinds.
They grew tails.
Their bodies bent down, and their arms became like legs.
They could no longer speak.
They became baboons.
[a Tswana story from southern Africa]
Inspired by: "The Baboon Was Once Human" in Among the Bantu Nomads by J. Tom Brown, 1925.
Notes: You can read the original story online. The original story says "a fire was made upon a large smooth flat stone" but it does not say by whom or why, so I just had the sun heating the stone; if I find another version of this story, I'll change that based on what I learn. 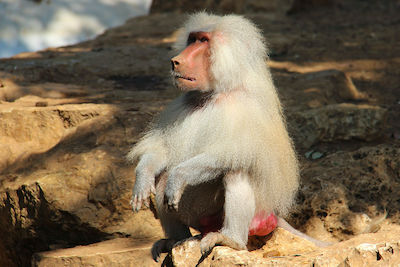