148. The Eagle and the Leopard

Eagle and Leopard were boasting about who was the best predator.
“I’m the best!” proclaimed Eagle.
“No, you are not!” Leopard protested. “I’m the best!”
“I’ll show you who’s best,” Eagle shrieked, and then he swooped down, seized one of Leopard’s cubs, and flew back up to his nest.
Leopard began to weep. He ran, he jumped, but he could not fly up to rescue his cub. He went everywhere, looking for someone to teach him to fly. But Leopard did not have wings; he could not fly.
That is how Eagle showed Leopard who was the best predator.
[a Fang story from Gabon]
Inspired by: "Which is the Better Hunter, an Eagle or a Leopard?" in Where animals talk: west African folk lore tales by Robert H. Nassau, 1912.
Notes: You can read the original story online. This is a legend of the Fang people. 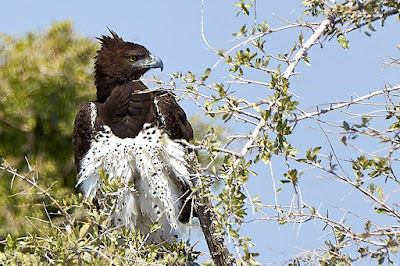