54. The Leopard and His Drum

Leopard was hungry. “I’ll say I’m sick,” he decided, “and when my friends come to visit, I’ll eat them.”
So Leopard beat his drum slowly and sang:
O Antelope! Rabbit! Monkey!
Your friend is sick; he needs you.
O friends, Leopard needs you.
Antelope approached, together with Rabbit and Monkey. “Give me the drum,” Antelope said. “I will sing too.”
Leopard gave Antelope the drum, and Antelope sang:
Leopard isn’t sick, O friends!
He’s scheming, scheming…
Leopard grabbed the drum. “You’re no musician!” he shouted.
But Antelope, Rabbit, and Monkey had already run away.
Leopard didn’t get to eat anybody.
[an Ambundu story from Angola]
Inspired by: "Dog and Lizard" in Folktales of Angola by Heli Chatelain, 1894.
Notes: You can read the original story online, and the Kimbundu text is also available. The story has deer, antelope, and duiker; I just used antelope. 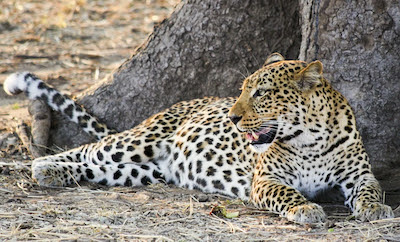