44. The Rabbit and the Skunk

Rabbit and Skunk were friends.
"Let's play hide-and-seek," said Rabbit. "You go hide!"
Rabbit waited and then turned himself into a leopard. He found Skunk hiding under a bush and growled at him.
Skunk was terrified; he didn't recognize Rabbit. "Help, Rabbit!" he shrieked. "There's a leopard!" Then Skunk started crying.
Rabbit revealed himself and said, "Skunk, you are more cowardly than a hyena. But I will teach you to twist and turn so that you can run away from your enemies and escape."
Then Rabbit taught Skunk how to maneuver, and that's how Skunk got his nickname "Mr. Turn-and-Swerve."
[an Ila story from Zambia]
Inspired by: "How Skunk Came to be a Helper of Men" in The Ila-Speaking Peoples Of Northern Rhodesia, Volume 2 by Edwin Smith and Andrew Murray Dale, 1920.
Notes: You can read the original story online. In the first part, Hare growls like a lion, and that also scares the skunk. The striped polecat (Ictonyx striatus) or African skunk is found throughout southern Africa. The author comments: "The name Salama-salama given to the Skunk indicates its manner of running, jumping from side to side, turning and twisting about, so that it is very difficult to catch or hit. From its being a difficult target to its enemies, the Ba-ila conceive it to be a valuable medicine in time of war. Some take its nose, others some of its hair, and put them in the insengo, medicine receptacles worn on the body. These are charms to ensure that the spears of the enemy will fail to reach the wearer: that, indeed, he will be as liard to hit as the Skunk. It is to this that the Hare refers when he says that some of the Skunk's flesh will be useful to men. He also refers to the fact that the Skunk's urine is used to perfume tobacco." 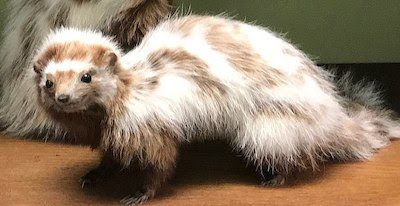