22. The Origin of the Suk-Suk Bird

There was a young bride who went to dwell in her husband's house.
One day, her father-in-law and mother-in-law sent her to water the donkeys. "Suk-Suk!" she called to the donkeys, which is what people say to lead donkeys to water.
While she was watering the donkeys, robbers attacked. They killed her and stole the donkeys.
The dead bride's soul became a bird, and the bird sings this song: My father-in-law, my mother-in-law, they told me to water the donkeys! Suk-Suk!
You can hear her in lonely places and near the riverbeds.
That is why the bird's name is Suk-Suk.
[a Tigray story from northern Ethiopia]
Inspired by: "Of the Bird Called Suksuk" in Tales, Customs, Names, and Dirges of the Tigre Tribes by Enno Littmann, 1915.
Notes: You can read the original story online. The author does not identify the bird, but there is a sandgrouse, Pterocles lichtensteinii sukensis, which is found in Ethiopia. 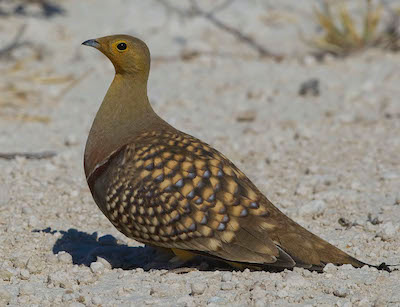 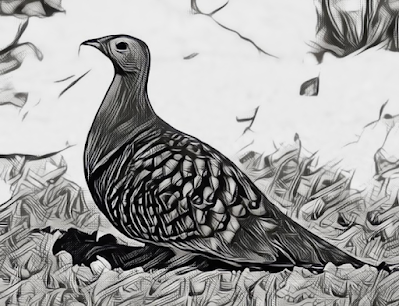