92. The Lion and the Baboon

Baboon knew that Lion was stalking him, so he took two flat, round rocks and attached them to the back of his head. They looked like eyes!
Now when Lion crept up on Baboon from behind, he thought Baboon's eyes were staring at him, and he backed off.
Even so, Lion did not give up stalking Baboon.
One day, Baboon sat on the edge of a cliff. He knew Lion was approaching. As Lion got closer and closer, Baboon suddenly bent down. Lion sprang and then went hurtling over the cliff, falling to his death on the ground far below.
[a Khoekhoe story from Namibia]
Inspired by: "The Lion and the Baboon" in Reynard the fox in South Africa; or, Hottentot fables and tales by W. H. I. Bleek, 1864.
Notes: You can read the original story online. This is one of the stories that Bleek took from Kroenlein's manuscript. 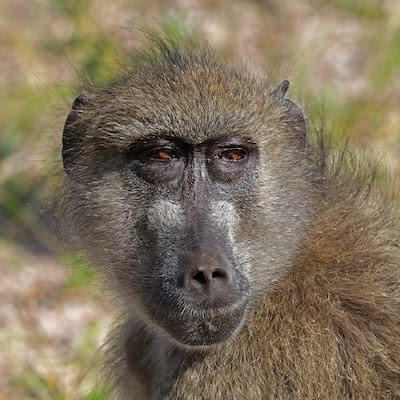